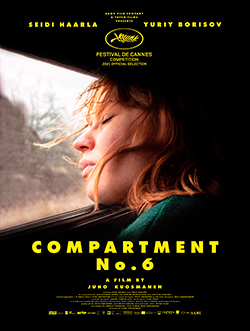 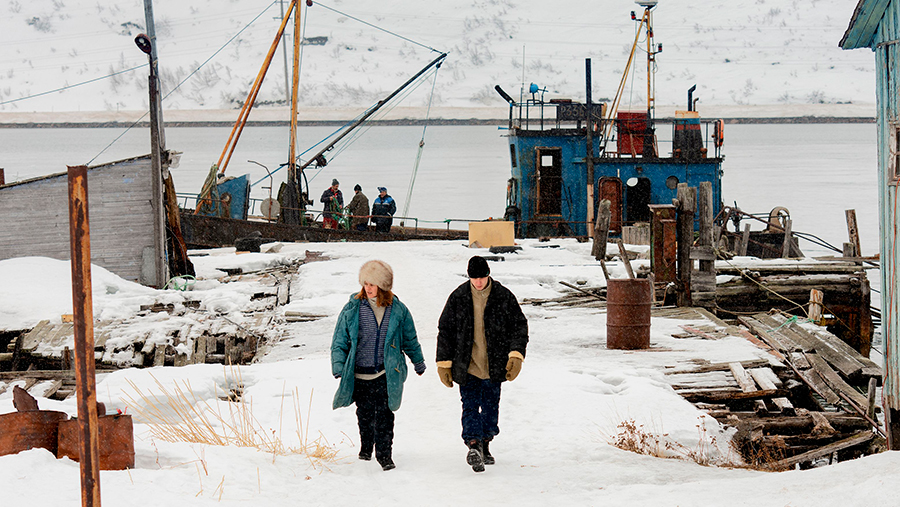 A great surprise in Cannes is the Finnish-Russian coproduction directed by Juho Kuosmanen, who had previously presented his striking black-and-white debut feature The Happiest Day in the Life of Olli Maki in the UCR section and returns now with his second film (and we know of the difficulty of the “second” film) to the competition – only to receive a standing ovation.

Compartment #6 unfolds like a simple story of a man and a woman sharing a train compartment on the journey from Moscow to Murmansk. From the start, it seems like a very predictable trip, a predictable story with a very predictable gaze of the woman, a foreign student, ticking off her list one cliché after the next of her “Russian” experience: vulgar language, booze, petty crime, and so on. Yet this journey is ultimately more than a romantic comedy or a melodrama, and even more than a road movie (with a train instead of a car): it is a journey of self-discovery.

The Finnish student Laura (played by an amazing Seidi Haarla) is first seen at a party held by her landlady and lover Irina (Dinara Drukarova, who once upon a time, in the very same 1990s in which the film is set, starred in Alexei Balabanov’s Of Freaks and Men). At the event, which Laura films, her camera captures some key figures of the cultural elite, or what used to be called the intelligentsia, who appear as real-life characters. Laura is part of the event and yet she is an outsider; she observes and films the experience with her video camera, which she uses to make a diary of her stay in Russia. She is a student of archeology, and she wants to “dig deep” and see the petroglyphs in the far north “to understand the past, so we know who we are”. Important is less the past, though, but the understanding of the self. Irina sends Laura off alone on a trip they planned together, and later she ditches her when she moves to another relationship, highlighting the fragility of Laura’s character and her lack of confidence in the journey, in her profession, and in her sexual identity. Laura seems mature, but she is quite insecure. Sometimes she runs away, wanting to break off the journey, then she continues; sometimes she wants to do the sensible thing (stay on the train) but follows instincts rather than reason. 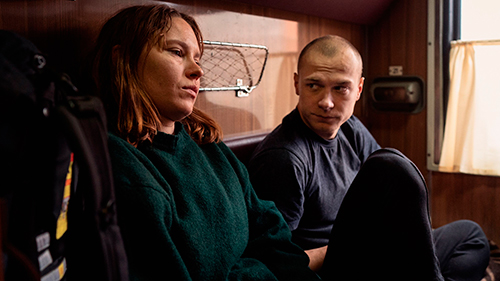 On her train journey she meets Lyokha (played by a fabulous Yuri Borisov), a miner, whose vulgar language and alcohol consumption cover a soft soul, which becomes visible when he fools around on a platform, or when he touchingly visits an old woman, a sort of adoptive mother, to bring her food supplies and chop up some firewood on one of the stops on the journey.

Laura and Lyokha could not be more different: woman and man, aspiring intellectual and simple worker, refined language and vulgar words, a foreigner and a Russian, a finely drawn portrait by Laura and a naïve, child-like drawing by Lyokha. They have nothing in common. Or do they? Laura aspires to be part of a culturally sophisticated social circle, to discover her roots, to learn about the country where she studies; yet she remains outside. On her journey, she continues to document her experience on her camera, and when it is stolen by a Finnish traveller whom she allows to share the compartment for a stretch of the journey she is devastated. Images (recorded on film), words (the poetry recited at the party) and signs (the petroglyphs) mean a whole world to her, they serve as a way of making a mark, her mark. Lyokha, on the other hand, seems to know where he belongs, what needs to be done – not always the most legal way, but he gets things done.

The film is inspired by Rosa Liksom’s novel of 2011, which has won numerous awards. Set in the late Soviet era, it tells of a train journey to Mongolia rather than the arctic, where the male character Vadim is an ex-convict. From his behaviour and language, Lyokha might well be, too, but we don’t know; and this is because not he is the main character, but Laura. The film is set in 1990s, marked by the old telephone booths Laura uses, her Walkman with a cassette tape, and her video camera. The musical theme of the song “Voyage Voyage” is a nod to the reverence of Western pop culture in those years, and a counterpoint to the quite un-romantic voyage undertaken by the two characters here, which leads to a quite unusual finale in the self-discovery through an Other, to understanding through misunderstanding(s). At the start of the journey, Lyokha wants to know the Finnish words for “I love you” and Laura mocks his own use of language by teaching him the Finnish phrase for “fuck off”, haista vittu; at the journey’s end, this phrase will shape the ending, or beginning, of their mutual understanding or misunderstanding. Ultimately, words no longer matter: communication, like co-production, works on a different level. This is best expressed in the harmonious merger of two cultures in this fine (and first) example of a co-production where Russia is the minority producer rather than the lead partner. 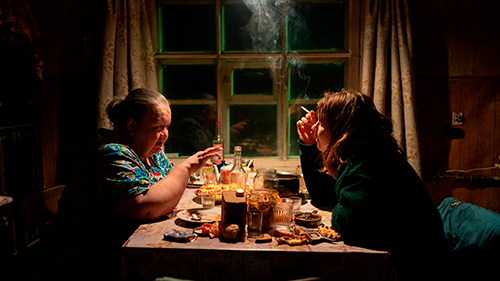